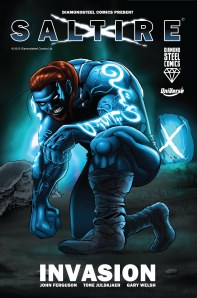 It is safe to say that in the world of comic book heroes, the States have got a rather large monopoly of the characters; this seems set to change with the newest hero to come out of Scotland, Saltire.

Written by John Ferguson and with art provided by Gary Welsh and Tone Julskjaer; who both won the chance to provide the artwork for the comic after winning a competition ran through the Duncan of Jordanstone College of Art & Design. This first collaboration between the group fits perfectly with the overall tone of the comic, and seems like match made in heaven; I for one can’t wait to see the work for them all in the upcoming issues.

The comic is a mixture of Scottish history and mythology, but you don’t have to have an overwhelming interest in either to enjoy this comic. Book One – Invasion gives the reader a quick introduction into the tribes that are to be involved in the upcoming battle against the Roman’s. When it comes to first issues, it is often the case that you are presented with too much information and you feel overwhelmed by the story only a few pages in. This however is not the case with Saltire. We are gradually introduced to the main players of the story and the mythos that the Ferguson has created for this world.

Whilst the character of Saltire is not the only warrior in the story, he is certainly the most prominent. Every super hero team needs a leader, and it is clear from his introduction that the ultimate guardian of the thirteenth tribe is the one we are to be following.

Book Two – Inception is of a completely different tone to the first issue. I can see why Ferguson wanted to put the issues in this order, because some new readers may have been scared away initially if they were given the story of Saltire‘s creation straight away. You need the first issue to come to terms with some of mythology surrounding him and to gently ease yourself into following everything. The second issue does not hold back though and gives the full story on how Saltire came into being. His creation story is one full of anger,  acceptance and curiosity. The overall tone in this issue feels a lot more rounded than the first and seems like something you’d expect much further down the line; it shows great promise from Ferguson. Once again the artwork completely echoes and fits with the writing and as I mentioned earlier can’t wait to see the rest of the world Welsh and Julskjaer have to offer.

I definitely recommend picking up a copy of Saltire is you have the chance. The mixture of Scottish heritage, Game of Thrones style mythology and a refreshing new story really mix well together.

Check out the tweets!

Blog The Blummin’ Doors Off

Blog The Blummin’ Doors Off